Agriculture represents ¼ of greenhouse gases (GHG) emissions worldwide. In France, 17% of GHG are emitted by agriculture, ¼ of which is generated by dairy cattle farming. Dairy cattle farms, like all cattle farms, can compensate for these emissions thanks to soil carbon storage in pastures. However, soil carbon storage cannot contain all GHG emissions, which is why the French dairy sector promised to reduce its carbon footprint.

Pertaining to this promise, the Trevarez Knowledge Transfer Centre, linked to Brittany’s Chambers of Agriculture (North West of France) and operating in partnership with the French Livestock Institute (Idele) is welcoming a new series of experiments on low carbon footprint which were introduced during a press conference on the 20th of April 2018.

This programme was launched on the 1st of April 2018 for a minimum duration of 4 years. It is linked to the promises made by France during the COP21: to reduce France’s GHG emissions by 75% between 1990 and 2050. The agricultural sector is hoping to reduce its own emissions by 12%. 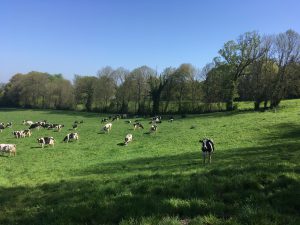 Trevarez KTC and Idele, long-time partners, have worked jointly since the 90s on resource efficiency in the dairy sector, to which the low carbon project is linked. This project also has links to similar experiments, like the French Dairy Interbranch Organization (CNIEL) and its Low Carbon Dairy Farm. Trevarez farm, with its 120 cows on 120 hectares will study different solutions to reduce its greenhouse gases emissions, its main goal being to reduce Trevarez’s carbon footprint by 20% over the course of 4 years.

To attain this goal, several aspects will be studied:
Cattle feed management: reduce concentrates dependency, use canola meals (instead of soyabean) and improve grass silages…

The KTC’s goal is to produce 8,000 kg of milk per cow per year, using as only concentrate feed 400 kg of protein concentrates per cow. By achieving this, the KTC seeks to show dairy farmers that it is entirely possible to associate productivity with profitability and environmental protection.

You can discover the Trevarez KTC and learn more about its different projects during its open days on the 7th of June 2018.